You are here: Home » Environment » Cows are messy eaters… 5% wastage! 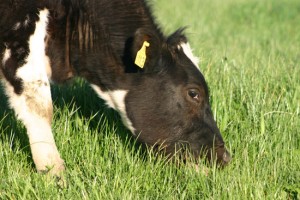 Dairy cows in New Zealand are fed almost exclusively on a range of pasture grasses. If you watch a cow eating you will notice that there is always some of each mouthful that falls to the ground uneaten – cows are messy eaters.

Dr Pranoy Pal and his colleagues, Professors Clough and Kelliher from the Department of Soil and Physical Sciences at Lincoln University named this fallen plant material ‘litter-fall’.

They then undertook a study into how litter-fall occurred and its effect on nitrous oxide (a greenhouse gas) emissions from New Zealand pastures.

Once fallen from the cows’ mouth, the plant parts in the litter-fall either stay on the surface after falling from the cow’s mouth or are trodden into the soil when grazing animals walk over them.

To obtain samples of the litter-fall and the original pasture, Dr Pal marked out one metre square areas (quadrats) randomly through a paddock before and after grazing by cows. Once the cows were moved to another pasture Dr Pal used a leaf blower-vacuum machine to collect the litter-fall and, by difference, was able to calculate the rate of litter-fall. The litter-fall was later analysed in the laboratory.

“In starting this research, I was very relieved to find I was not required to spend days chasing cows around paddocks, trying to hold a bag under each cow in order to collect the litter-fall.”

Dr Pal found that the litter-fall rates ranged from 53 to 72 kg of dry matter per hectare in a single grazing event, which meant that 4 –5% was wasted in the form of litter-fall off the expected total consumption of the animals.

Dr Pal showed that under suitable conditions about 1% of the nitrogen contained in the litter-fall may be transformed to nitrous oxide and emitted to the atmosphere; fresh pasture litter-fall during grazing by dairy cows did induce nitrous oxide emissions.

“Agriculture is an important component that contributes to global climate change because, besides being essential for food production, it add significantly to the global greenhouse gas inventory,” said Dr Pal.

Agricultural ecosystems cause greenhouse gas emissions due to regular man-made nitrogen inputs of fertilisers and manures. These can leach to the subsoil and pollute the waterways and also cause ammonia volatilisation and gaseous nitrogen losses, such as nitrous oxide, which consequently cause ozone-depletion and global warning. Scientists already knew that the nitrogen cycle (the movement of nitrogen throughout the environment) is considered ‘leaky’ as nitrogen products are lost in various ways from the system.

This research by Dr Pal makes an important addition to Lincoln University’s long-standing greenhouse gas emission research programme by scientists and technicians in the Department of Soil and Physical Sciences.