You are here: Home » News » Nutrient rich grass must be better!

Nutrient rich grass must be better! 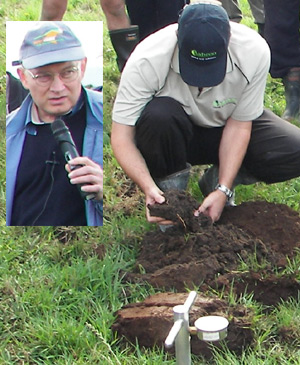 In recent years NZ farmers and growers have been helped to “join the dots” and grow healthier produce with assistance from world-renowned expert Arden Andersen.

The American, who will visit NZ early next year lectures on biological growing practices and tells those interested, often farmers, how they, and their animals, can benefit and at the same time improve their bottom line.

Dr Andersen will conduct a four-course speaking tour; two focusing on soils being held in Ashburton and Taupo, and two on human health in Havelock North and Auckland.

Biological agriculture focuses on re-establishing mineral balance and enhancing beneficial microbiology in the soil and is applicable to all production sectors.

A conservative estimate is that 100,000 hectares of land is being farmed by biological principles by hundreds of farmers across all agriculture sectors.

The approach uses both conventional and organic farming methods and combines chemistry, physics, biology and microbiology, with the use of sound agricultural management practices.

These practices include full spectrum mineralisation and supporting microbial diversity that leads to rapid increases in humus, reduced use of petrochemical inputs, and results in nutrient-dense food.

Biological management of soil increases availability of balanced minerals, making it possible for pasture or crops to be more nutritionally-dense, all the while sequestering carbon in the soil for better water retention.

John Kamp, a sheep, beef and dairy farmer in Mangleton, Hawke’s Bay, says attending the soils course not once but twice, has helped him totally change his farming approach.  As a syndicate shareholder he has also influenced three South Island dairy farms to become biologically managed.

“What Arden had to say struck a chord with me,” says Mr Kamp. “As farmers we have a responsibility to grow nutrient-dense healthy foods; we are contributing to the welfare of the human race and there is huge pride in knowing that what we are doing is beneficial for the land, people and our environment.”

Jeff Williams agrees. A dairy and chicken farmer on the outskirts of Palmerston North, whose farm recently featured on the Country Calendar television programme, Mr Williams attended Dr Andersen’s course four years ago and says he is far happier in his farming now.

“Modern dairy farming is extremely stressful and I think many farmers have forgotten their job description,” says Mr Williams. “As farmers we produce food for humans and as we are what we eat, it’s our responsibility to produce food that helps humans be healthy. Biological agriculture is an option that is becoming more and more mainstream as consumers understand better that some growing practices create better quality foods.”

Nicky Watt is an Ashburton dairy farm manager and farm consultant with a BAgSci degree. She and husband Andrew have gained very positive economic returns from introducing biological agriculture practices after she attended an Andersen course four years ago.

Profitability is up and the fact the couple were 2012 finalists in the New Zealand Dairy Business of the Year competition, taking out both the environmental and people management awards, attests to the fact they are in the elite of New Zealand farmers.

The Watts have a peak of 3000 cows on the 810 hectares they run under a biological programme. Theirs is a very scientific approach with cut cage trials showing far better nutrient cycling, far better response to the reduced amount of nitrogen fertiliser applied, and 20 to 25 percent greater pasture growth rate from foliar sprays.

“Ours is a whole farm approach and it is driven by economics. Having said that, listening to Arden opened my eyes to how complacent farming had become; it is amazing what the soils can do if they are treated right,” says Mrs Watts.