You are here: Home » General » More than one cause of mismatched lambs

More than one cause of mismatched lambs 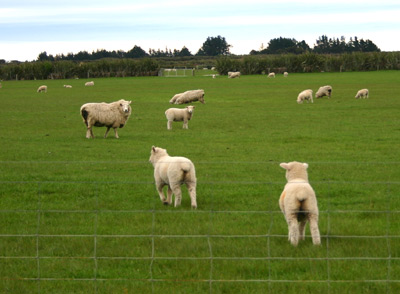 When one of a set of twins is twice the size of his mate you’ve got problems – especially when the ewe decides she only likes the big lamb.

While it’s one thing to try and find a solution for problems like this it’s yet another to find out exactly what causes ewes to have one large and one small lamb.

We asked several people within the industry why this occurs and whether there’s anything farmers can do to prevent it.

Their answers varied and are as follows.

“Sometimes you can get embryo death after the cotyledons have formed, the remaining twin can’t grab any more sites as that part of the development is over… this is why you can sometimes get a very small single lamb from a big healthy ewe.

“With triplets there is more competition for cotyledons.

“I doubt management would have any particular effect on this except for severe underfeeding possibly straight after mating. It’s more to do with whereabouts in the uterus the embryo attaches.”

“There are a couple of reasons as to why it might be happening. If the lambs are born smaller, then it is obviously an occurrence during gestation. This can happen when placental formation is affected.

“Placental formation happens in the first third of pregnancy basically. I believe nutritional stress at this time can result in an uneven distribution of caruncles, which are the attachments of the placenta to the uterine wall. This reduces nutrient transfer to the placenta with fewer caruncles, hence a small lamb.

“Probably a feed issue post-mating, so the solution is to avoid feed pinches all the way from mating.

“From a general point of view I would think that this is because of underfeeding last autumn followed by only average feeding during late winter.

“Underfeeding when the egg is implanting and the placenta is growing (first trimester) may cause variation in the size of each of the twin placentas.

“Then average feeding later would mean that the twin with the small placenta would not be able to compensate in the later part of foetal growth. The result would be mismatched size of the twins.”

« Making the most of your computer mistakes
Nutrient rich grass must be better! »