You are here: Home » News » Bike design could save lives

Bike design could save lives 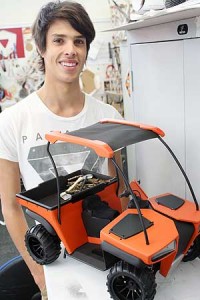 With a few key modification to the design of a quad bike a Massey University student is on the way to realising a goal of reducing the inury toll from these commonly ridden farm machines.

The 22-year-old has designed the Huntaway, a prototype model of a quad bike that features a roll-cage-type rooftop and a seat that locks in at what would otherwise be the bike’s tipping point.

More than 800 people are injured on farms riding quad bikes on farms every year in New Zealand. So far there have been five fatalities in 2012.

The Labour Group of the Ministry of Business, Innovation and employment has expressed a commitment to reducing the number of injuries and fatalities caused by quad bike accidents – something Mr Marshall wants to achieve with his design.

The Huntaway acts as an interim between farm ute and a farm bike, he says, and would be ideal for small jobs like fixing fences.

“The Huntaway bike has been developed specifically for farmers on their farms and has involved direct input from farmers within the design process,” he says using an online community of farmers for feedback.

Mr Marshall believes with its roll cage, and the potential to eventually be fully enclosed, the Huntaway would be of interest to users outside the rural environment including the military and Department of Conservation workers.

“The bike is a safer alternative to the quad bike whereby the Huntaway’s design enables riders to be enclosed, important equipment to be transported more efficiently and applies physical feed back when pushed in terrain it cannot handle.”

Its other key modification is the way it addresses the issue of weight distribution. Riders can be buckled into the seat, which allows their body weight to be shifted around to match the direction being driven – in a similar sensation to riding a motorcycle -, but the seat then locks when it senses the bike may overturn.

He has attempted to counter differences in industry opinion as to the merits or dangers of riders being buckled in by seatbelts to design his seat so that it does move from side to side.

“The seat is able to lean side to side to a point of 15 degrees each way. This swivel point is located near the base of the seat to enable effective movement of mass. This movement of mass improves the performance of the quad bike especially when cornering and moving along slopes.”

Mr Marshall’s design also lowers the centre of gravity, with horizontal engine pistons fitted that move from side to side rather than up and down, while the gap between the body of the quad bike and its wheels has also been reduced.

Other modifications include a light all-weather sail cloth-type fabric roof top and a ‘step-through’ design for the swivel seat, rather than the traditional design which involved the rider putting one leg over the seat before sitting down.

Mr Marshall, who is of Ngai Tahu descent, says he became interested in addressing quad bike safety after time as a casual worker on farms during his summer holidays. ‘It’s something everyone was talking about wherever you went on the farm.”

His design features from Saturday November 10 at Exposure an annual showcase of work by emerging young artists and designers from Massey’s College of Creative Arts, which traditionally opens the BLOW creative arts festival.

Fellow student, Nick Marks, from the Albany campus, has also worked on a quad bike design, specifically to counter control loss. His design, with the capability of shifting the vehicle’s centre of mass to keep a low centre of gravity preventing it from overbalancing, is part of is part of Design Exposure being held at Auckland as part of the BLOW.

Mr Marshall’s design will be on show at: