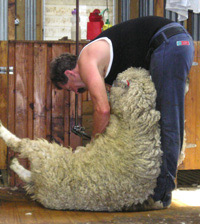 When comparing type for type, overall price levels are still well above the last North Island wool auction. The weighted indicator for the main trading currencies was 0.14 percent higher than the previous week having minimal impact.

Limited activity with China dominating, supported by India, Western Europe and the Middle East. Next sale on 8th November comprises approximately 10,400 bales from the South Island.