You are here: Home » News » A toxo disaster – despite vaccination

A toxo disaster – despite vaccination

When you go to the trouble of vaccinating your two-tooths against toxoplasmosis you expect these animals will be protected. Trudi Baird tells of the dreadful lambing that resulted when this was not the case.

The Southland farmer says: We were let down by our toxoplasmosis vaccination programme. Over half of our scanned in-lamb two-tooths either aborted, reabsorbed fetuses or gave birth to dead lambs. The dead loss, based on a conservative figure of $105 per lamb, amounts to over $35,000 of lost income. A significant loss on our 200ha Orawia farm. 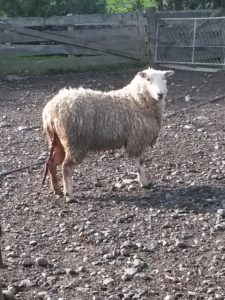 A two-tooth aborting close to birth or giving birth to a dead or very weak lamb. The placenta was always a reddish brown and wouldn’t dislodge for a good number of days.

We tried to salvage what we could and thanks to amazing pre-tup pasture growth, our triplet drop was abundant and so we mothered-on triplet lambs to over 100 two-tooths. We would have done more but not all of them came on to their milk so at least another 100 were left as wet-dry. There was a similar number again of twinning two-tooths who only gave birth to one healthy lamb and so just carried a single.

Initially we didn’t know what the issue was so acted fast to find out what we were dealing with, particularly in case it was contagious. By the time the first lab tests failed to test positive to any of the common issues, we already knew whatever the problem was, the ewes were not showing signs of it despite been mixed with the two-tooths since scanning. This pointed to a vaccination issue, prompting us to expand the lab testing  to include toxoplasmosis. This time the result was positive for all samples tested – our vet was surprises at such definitive results.

As we had vaccinated against the disease our vet said the animal health company would be on the ball to find out where the breakdown had occurred. Unfortunately, communication was slow and then suggestions were made that just didn’t sit well with either my husband, Phil, or myself. I felt we were being talked down to and disregarded, which made us determined to get answers.

In order for an abortion storm like this to occur, there are about three scenarios that can occur. Our situation didn’t make a good fit with any of these, which was puzzling for both us and the animal health company. The company was insistent the vaccine batch was not the problem. They were initially insistent we must have a cat problem. We don’t. We have a neighbouring farmer with a dislike for cats so we’ve always assumed this is why we seldom see a stray.

Sure, it only takes one young cat with an infection, which is possibly what has happened, but to over-ride the immune system of a fully vaccinated two-tooth mob takes some doing. To put a fine point on it, this is what a vaccination programme is designed to mitigate. 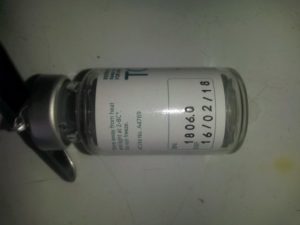 The vaccine we used – note the batch number.

We were extensively questioned on dry feed but we don’t store hay, feed hay or other dry feed that cats might like to live amongst. The other issue was with the handling of the vaccination, but because I behave like a security guard in charge of couriering money when it comes to handling our vaccines, I feel confident I couldn’t follow the procedures any better than I already do.

The company undertook extensive testing over our whole flock and it showed elevated toxo antibodies is widespread and yet only the twotooths showed signs of being affected. The company suggested there was more than a toxo issue and seemed intent on taking this line but the tests kept pointing to toxo and nothing else.

Our own enquiries have highlighted to us the vaccine is no longer considered to be as reliable as it used to be and I was most interested to read last week in our local newspaper that there have been a number of reports of toxo abortions this past lambing in vaccinated sheep.

So why has the problem occurred? This is the big question that the manufacturer of the vaccine cannot give us a definitive answer to. In our meeting with the company rep, with our vet present, there was an acknowledgement from her the vaccine hasn’t lived up to or delivered on its marketed promise but this doesn’t change our dead loss.

We enquired about compensation and were asked to submit figures but it has come to a dead end. It was interesting because we were asked at least three times if we were going to get our lawyer involved and initially we did contemplate it but I’m from a legal office background and it really irked me that in order to have the company act further we would have to involve lawyers, who, with respect, know very little about farming, sheep vaccinations and stressful lambings, and who will basically spend the next few months firing letters backwards and forwards.

I imagine things would be different if it were babies we were dealing with and not lambs.

We received a final report from the company last week, which really sheds no light at all on why the problem occurred. In summary, our opinion is their conclusion is weak and continues to ‘pass the buck’ by questioning the validity of lab testing, the possibility of other diseases being the problem (although no others were detected on any of the tests), the immune response of our twotooths and the continued insistence we probably have a feral cat problem.

As a result of all of this I now know more about the disease than I ever desired to. One of the most interesting things I’ve learned, apart from the fact the vaccination doesn’t give full protection, is when lab testing for the disease, just because a test comes back negative it doesn’t always mean a negative result.

Initial testing is done on the gut but toxoplasmosis doesn’t always reach the gut but should be present in the brain. So, brain analysis is very helpful – but it needs to be specifically requested of the lab by the vet who probably won’t think to ask for it unless the farmer asks.

Of course,testing comes at a price. My advice is, where reabsorption in maiden sheep is apparent, or there are unexplained abortions, or weak lambs and any initial testing is negative, pay the extra money to have the sheep blood tested for toxo antibody levels and viable aborted samples tested for toxoplasmosis in the brain, even if you have vaccinated.

Photo taken in December when the last lot of wet dries (the ones that had silently aborted) were drafted out at weaning and ear marked so that we will know which ones they are in the coming season.

Understanding what I do now, I think if more farmers do this kind of analysis there may potentially be a significant issue alerted to, that so far is occurring under the radar. What’s more, any ewe lambs that have been infected in the womb but born otherwise healthy (which is potentially more common than we realise) have an apparently small but increased chance of aborting or reabsorbing the fetus in their first lambing. I think there could be a significant issue here too and wonder if the increased incidence of unexplained wet-dries in maiden stock is a silent toxoplasmosis issue, despite vaccination?

It turns out the disease is a much more complicated beast than I ever realised.

There is a breakdown occurring somewhere and I think farmers need to be aware of both this and any reliability issues associated with the vaccine.

Trudi is interested to hear from any other farmers who have had trouble with this particular batch of vaccine. She can be contacted on email at truditwinlaw@gmail.com