Both calves and lambs can suffer from polioencephalomalacia and easily go undiagnosed and die as a result.

The disease effects the brain and is basically a thiamin (B1) deficiency. 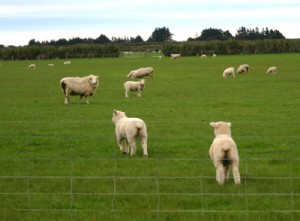 Often an older lamb or calf will be found lying flat, head flung back, flinging its legs about but more-or-less stuck on its  side.

Sometimes they will appear blind, will be grinding their teeth etc.

A quick injection of thiamine (one of the products available is called B-calm) will often bring them right.

Over the years plenty of lambs have succumbed to “swayback” when a B1 shot might have bought them right.

Back in March 2002, Farmnews writer Trudi Baird interviewed Gary Clark of Labnet Invermay on the subject.

Dr Clark said then that it can be associated with a change in diet from poor to good quality and he wondered whether our weather patterns have also impacted on the problem.

High sulphur intake can also play a part and Dr Clark said he would generally relate high sulphur with sulphur retaining crops such as brassicas.

Despite this the polio-type disease often occurs in calves still on milk and lambs still being fed by their mothers.