You are here: Home » News » New dairy factory gets closer 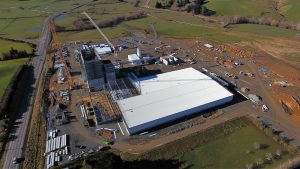 The company is striving to be the ‘World’s Best Nutritional Business’ manufacturing and producing premium infant milk formula mainly for export from its purpose-built nutrition plant at McNab, near Gore, Southland.

The $240 million project is gearing up for production to begin in August 2018, with 65 fulltime employees.

May said continued recruitment of milk supplier/shareholders, and staff, were major focuses in the next six months.

The company had received significant interest from farmers in becoming shareholders and was confident of having the 25 to 30 needed by December, he said.

“The farmer shareholders already on board are embracing the opportunity of superior returns by supplying milk into a fully integrated nutritional business.”

Mataura Valley Milk milk supply manager Dave Yardley said farmers he had met to date were excited about the opportunity, and he had a busy schedule of meetings planned.

“The small size of the business, the connection they will have as shareholders, and the fact we’re going to the higher end of the value-added market, are really peaking farmer interest.

“Positivity has returned to the dairy sector so people are seeing it as a good time to review where they are and whether they have a better choice out there,” Yardley said.

May said the plant’s construction was on schedule with the drying tower already at its maximum 40m height.

The plant would be unique in Australasia as it would meet and exceed several international nutritional validation standards and contain features which set it apart from a traditional dairy plant, May said.