Gentle interactions improve the relationship between humans and animals. Calves that are stroked by people early in their life gain weight more quickly than animals that are not stroked. 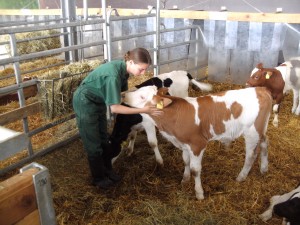 This can be of commercial value for farmers, as cows produce more milk if they had a higher weight gain as calves.

In conventional dairy farming, calves are separated from their mothers on the day of their birth. They are then usually kept in single pens for a period of time before being housed in groups. The animals can only develop a good relationship with humans if their caretakers have regular and gentle interactions with them.

The recent study was published in the journal Applied Animal Behaviour Science, and as part of this researchers at the Vetmeduni Vienna studied 104 Holstein calves.

First author Stephanie Lürzel and her colleagues from the Institute of Animal Husbandry and Animal Welfare studied the calves at a commercial dairy farm in eastern Germany. Around half of the animals were stroked three minutes a day for a period of 14 days after their birth, whereas the other half was not.

Lürzel and master’s student Charlotte Münsch stroked the calves on the lower part of the neck. “In earlier studies our team found out that cows especially enjoy being stroked at this spot. The animals’ heart rates even fall during stroking,” says Lürzel.

About 90 days after their birth, stroked calves weighed more than the control group. The gentle contact with humans therefore appears to have a direct influence on the animals’ weight gain. “A study from the year 2013 shows that cows that gained weight more quickly before weaning produce more milk. The daily weight gain of the stroked calves in our study was about 3 percent higher than that of the control group. This would translate into around 50 kg more milk per cow per year,” Lürzel explains.

The experiments showed that stroked calves do not avoid people as quickly as animals from the control group. The avoidance distance was lower among the stroked animals. “This test clearly shows that regular stroking has positive effects on the human-animal relationship,” Lürzel points out. “In practice, I recommend animal caretakers to maintain regular gentle interactions with their animals. Even if there is not as much time as three minutes a day per calf, regular interactions still have positive effects for the animals.”

The results were different after calves were disbudded without anaesthesia about 32 days after their birth, as was the usual practice on the study farm. Disbudding is a common procedure at dairy farms: the horn buds are cauterized with a heated iron to destroy them before the horns can grow. After disbudding, the avoidance distances were higher in both groups than before the procedure. Furthermore, animals that had been stroked no longer differed from control calves. “Disbudding, a procedure that without anaesthesia involves enormous pain for the animal, apparently disturbs the good relationship with humans that had been established previously through stroking. Several weeks after disbudding, however, the effect of stroking on the human-animal relationship was visible again,” Lürzel explains.

On the basis of this and previous study results, ethologist Lürzel recommends gentle interactions with calves: “Farm animals that experience regular interactions with people, either with a veterinarian during a routine check-up or with the farmer during the milking process, benefit from a good relationship with humans.” Lürzel dismisses as untenable the opinion of some farmers that cattle should have fear of people in order to increase ease of handling. In the end, regular gentle interactions with the animals also have a positive effect on a farm’s commercial success.