You are here: Home » Animal Health » Beware the droopy eyelid! 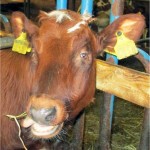 A new inherited disease that causes ptosis – retarded growth, intellectual disability and mortality in Ayrshire calves, has been discovered by a research group at the University of Helsinki.

The group, led by Professor Magnus Andersson, found the disease to be associated with a mutation in UBE3B gene.

Of the 129 tested Ayrshire AI bulls recently used in Finland, 17% carried the mutation. Moreover, UBE3B mutation may be connected to AH1 haplotype, which is associated with reduced fertility and has a carrier frequency of 26.1% in the North American Ayrshire population. The study was published in BMC genomics journal on 12 October 2014.

An inherited disease that causes serious developmental disorder in Ayrshire breed has been studied at the Department of Production Animal Medicine, University of Helsinki. The phenotype has been defined as PIRM syndrome according to its typical features: ptosis, intellectual disability, retarded growth and mortality.

The most easily noticeable symptom of affected calves is the ptosis. The exceptionally large upper eye lid gives a characteristic sleepy appearance of the affected animals.

Some affected calves also suffered from feeding problems, minor structural changes of the head and muscular hypotonia. The disease is recessively inherited i.e. affected animals have inherited the mutation from both parents

Heredity research traced the disease to a mutation in UBE3B gene, which partially prevents the normal expression of the gene. Mutation screening of the 129 Ayrshire AI bulls that are in use or have recently been used in Finland indicated a high carrier frequency of 17.1%. “The results of this study can be utilized in bovine breeding programs. With the successful prevention of PIRM syndrome the animal welfare can be increased and at the same time the financial losses for farmers and breeding companies can be reduced” says PhD student Heli Venhoranta.

In humans, mutations in UBE3B gene are associated with Kaufman oculocerebrofacial syndrome with similar pathological findings as in PIRM syndrome. Furthermore, mice engineered to lack UBE3Bexpression were reported having increased lethality.

The AH1 haplotype was perfectly associated with the UBE3B mutation in this study cohort. The estimated frequency of the AH1 haplotype was 26% in the North America Ayrshire herd. “The relationship between PIRM syndrome and AH1 haplotype needs to be clarified but our study does however provide an avenue for further investigation” concludes Venhoranta.