You are here: Home » Environment » Pork and Bee industry in court today 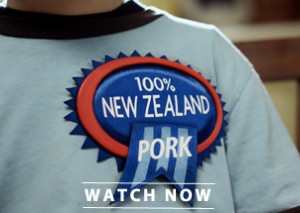 Today the pork board will be fighting yet again to protect their industry from biosecurity threats, but they have support from the National Beekeepers Association who have been given the chance to speak at the Supreme Court. The case is aiming to reverse Health Import Standards developed by the Ministry of Primary Industries (MPI) that the producers believe put their industries at risk.

“The biosecurity risks that the Government is willing to take are too big for our producers to carry,” said Green Party biosecurity spokesperson Steffan Browning.

“This National Government continues to put international trade ahead of biosecurity time and time again.

“Having two sectors fighting the same lax position of the Ministry should be a really clear signal for the Government to take their concerns seriously.

“The Government needs to take a huge step back and see the damage it is doing to our primary production sector by taking such a lax attitude on biosecurity.

“The Auditor General’s report into biosecurity showed that, ‘MPI is under-prepared for potential incursions from some high-risk organisms’ and that ‘serious weaknesses remain’.

“The Government, through MPI and the Ministry of Foreign Affairs and Trade is so locked in to defending its free trade position, that it can’t see the risk.

“The pork board has been fighting the Ministry of Primary Industries to stop the importation of pork meat that is infected with diseases that will have devastating effects on our pig herds.

“The beekeepers have to fight the same battle because MPI wants to let honey in which could spread new diseases to our already struggling bee populations.

“Once these diseases are in, they are here to stay and the taxpayer and the producers are stuck with huge costs to clean up or manage the impacts as we saw with the kiwifruit disease Psa.

“The Government needs to be take biosecurity far more seriously if New Zealand’s primary production and tourism sectors are to realise their potential and have a strong future.”