You are here: Home » News » The dark side of quiet cows

The dark side of quiet cows 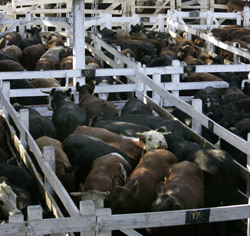 It’s always been thought that wilder animals were more likely to produce darker, firmer and drier meat – researchers have now found that it’s not just the wild ones that can have an issue.

Researchers from Murdoch University, in Australia, in conjunction with DAFWA and the Kylagh Cattle Company have now found that calm cattle were not exempt from the issue of dark cutting syndrome.

Dark cutting is a complex problem caused by low muscle energy (glycogen) at the time of slaughter. Depletion of glycogen during the pre-slaughter period is controlled by many factors, one of which is the animal’s temperament.

Temperament affects how agitated cattle become and how much adrenaline they release during handling, and therefore, in theory, how much muscle energy they deplete between leaving the farm for slaughter.

The syndrome in beef carcasses produces meat which is dark in colour, dry to eat, spoils quickly and has variable tenderness. It affected 3.6 per cent of more than two million carcasses graded by Meat Standards Australia in the 2011/12 financial year, costing the beef industry millions of dollars.

In their study, funded by the Australian Meat Processors Corporation, Stephanie Coombes and Dr Peter McGilchrist measured the temperament of 648 commercial lot fed cattle using flight speed, an electronic measure of how quickly an animal exits a weighing chute.

Flightier animals will exit at a faster speed while quiet animals move more slowly. Their results showed that as flight speed increased, muscle glycogen concentration in the loin muscle at the time of slaughter also increased. This indicates that the cattle which had higher flight speeds were in fact at a lower risk of producing dark cutting carcasses in this study.

Only two per cent of the cattle in the study were graded as dark cutters (pH greater than 5.7 and/or meat colour score of four or higher) and these carcasses were evenly distributed across the range of flights speeds measured.

“Even though calm cattle certainly have their production benefits, they are not exempt from the issue of dark cutting,” said Ms Coombes.

Calmer cattle have been shown to have higher growth rates and more tender meat than flighty animals. These positive benefits have been shown in many different studies around the world. The owner of Kylagh Cattle Company, Ivan Rogers said flighty cattle posed a danger to their handlers, consistently go onto feed slower, take longer to reach slaughter weight, have a higher morbidity rate and generally perform poorer than calm cattle in the lot fed environment.

“They have the potential to upset calm cattle, which is why we always try to purchase quiet, well handled animals,” he added.

Dr McGilchrist suggested that producers need to continue to cull flighty cattle and minimize variation in temperament across a herd, but also to habituate their quiet cattle to change. He said that producers and processors also need to ensure that calm cattle are treated with as much care during the pre-slaughter period as their more reactive counterparts.

“The employment of common practices like yard weaning not only provide the benefit of improved handling ease, but also provide the opportunity to desensitize cattle to potential stressors, such as being mustered or drafted,” Dr McGilchrist said.

“All cattle also need to be exposed to changes in their environment, so that during the pre-slaughter period they don’t become as stressed and agitated.” Dr McGilchrist added that the effect of temperament was not completely understood and that further research was needed to unravel the interactions between animal temperament and energy metabolism during the pre-slaughter period.