You are here: Home » Animal Health » Pneumonia can frustrate 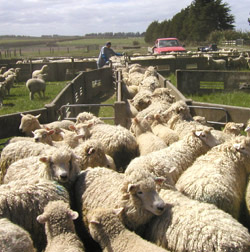 Dead lambs as a result of Pneumonia can be frustrating and costly.

Unfortunately Pneumonia outbreaks are rarely simple, especially in a group of lambs. The actual
infecting agent could be one of a number of bacteria, a mycoplasma or a virus.

Many of these organisms are commonly found in the respiratory tract of healthy lambs where they cause
no trouble – that is until some predisposing factor stresses the respiratory system.

The stressor could be the movement of a group of lambs from grass to a dusty yard, poor ventilation in
a shed, a build up of ammonia in a building, high humidity, overcrowding or any combination of these.

The clinical signs will vary with the severity. Early in an outbreak you may realize that there is more
coughing in the group than previously; when moving the lambs some may lag behind and be breathing
hard. There can be very sick animals which require individual treatments; there may be some deaths.

It is not uncommon to hear of a pneumonia outbreak, 2-3 days after driving lambs from pasture to a
dusty collecting yard. Often more will die up to two weeks later. And some of the survivors can have
sporadic cases of pneumonia every time that they were handled.

Treatment of individual lambs is difficult except in the small flock.

Treatment must be aimed at the cause of the secondary infection to attempt to save the animals, and to reduce lung damage. Because of the variety of agents that can be implicated, an accurate identification of the infectious agent is a must.

To prevent a serious pneumonia outbreak, attack the predisposing factors. If the collecting yard is very
dusty, lay the dust before the sheep come. Drive them slowly. And, good air movement through a barn or
shed is essential; stale humid air fosters pneumonia.

The inhaling of drench is also known to cause Pneumonia as it allows the bacteria to multiply,
precipitating Pneumonia.

The weather, directly and indirectly though limiting the grass available also can have an effect.

There are economic losses too. Lambs with chronic pneumonia, although they may appear normal have
a slowed growth rate and a predisposition to pleurisy.

While there are many forms of Pneumonia, Dr Roe said that at this time of year it is more likely to be
viral.

When animals are suffering from Pneumonia large areas of their lungs become consolidated with
absesses as the result of the infection. This limits the animal’s ability to breathe normally.

Acute fibrinous pneumonia in sheep of all ages and subclinical chronic non-progressive pneumonia
(CNP) in lambs or hoggets between three and 10 months of age.

Researchers at Massey University have said that:

“Due to the subclinical nature of the disease, detection of the disease is limited to examination of lungs
at necropsy or after slaughter.

“Inability to detect the disease and time of onset of lesions severely limits our understanding of the
epidemiology of pneumonia in sheep and its effects on productivity.”

While higher stocking rates would be expected to increase the number of cases of Pneumonia the
Massey study in 1999-2000 found that this was not so. They discovered that Southland (with the highest
stocking rate) of the regions monitored had the lowest prevalence.

They believed the tendency to have more cases as the season progressed could be put down to the
steadily decreasing maternal immunity from prior to weaning, with the prevalence of the disease increasing
as more animals become susceptible. The rate of prevalance in trials lambs in Southland was 22%, King
Country 48%, Northland 58%.

Usually the animal is off colour and will have drooping ears.

There is usually fever, coughing (which is more pronounced on exercise) and laboured breathing to
varying degrees. Usually the respiratory rate will be fast but the depth of respiration may be shallow,
probably because of pain.

When the disease is severe the animal’s head and neck are outstretched.

And…. from Australia on Pneumonia

Graziers and research workers observing flocks with Pneumonia have noted the inferior growth rate of
lambs affected by Pneumonia. There has been no quantification of this loss in Australia and no studies of
the effect of pneumonia on wool growth rates recorded in any country.

One New Zealand study has estimated that moderate to severe pneumonia is responsible for losses in
carcass weight of 1.5kg and a reduction in liveweight gain of 0.8 to 0.9kg per month for every 10% of the
lung surface grossly affected by pneumonia.

An earlier and extensive study of lambs slaughtered from a flock with no evidence of clinical
pneumonia found that 60% of the lambs slaughtered had lesions of pneumonia. Only 6.5% of lambs had
moderate to severe lesions and the effect on carcass weight of such lesions was estimated to be -0.45kg.

The economic consequence in the whole flock of this loss of carcass weight of lambs is approximately
0.2% only and, therefore, quite insignificant. This study has been criticised for underestimating the degree
of weight loss and the prevalence of moderate to severe lesions but it remains the only attempt to put an
economic cost on CNP of lambs in Australasia.

Pneumonia – time to look at the grass

The biggest factor which increases the prevalence of pneumonia relates to the nutritional value of pasture.

Colin Brown, of Agriculture NZ, said in March last year that trial results have shown that animals with a mild form of
pneumonia are more likely to fall victim to serious lung infections (chronic pneumonia) if grazing
low-performing pastures.

The degree of lambs who developed chronic pneumonia after grazing low performing pasture from
those grazing high quality pasture was “dramatically different,” he said.

Dr Brown does not play down the importance of managing other factors such as animal stress as a result
of overheating or worm burdens which he said all play a part. But it is the animal’s diet which is the crucial
factor that allows the disease to make the transition from mild to chronic.

Getting to know how pneumonia effects lambs goes a long way towards fighting against it. Put simply, many lambs within any given flock may have a mild form of pneumonia but show no symptoms at all and recover from it on their own. On the other hand, if this mild form becomes chronic then symptoms, including death, start to occur.

A mild form of pneumonia in a lamb means it has picked up a viral infection in the lungs which forms
a wound. In this instance, the animal could lose up to 15 to 20% of its lung area but still function as normal
with no check or delay in growth rate.

But problems can occur when normal bacteria present in the nasal passage of a lamb start to colonise on
the wound site whereby the bacteria spread and fill up the lung. The problem has now become chronic.

It is at this time, a strong immune system, reduced stress, the use of antibiotics, shearing stock and
many other management tools come into play.

Antibiotics administered at this stage are designed to kill the bacteria which have taken over the lung
and are putting the animal’s immune system under pressure. It is questionable as to whether the use of
antibiotics is worthwhile as in some cases, it may be too late or in others, the cost of treatment may
outweigh the value of the animal.

Eliminating stress factors including parasite burdens, heat, panting and diet, are commonly talked
about in fighting against chronic pneumonia.

Shearing animals is done to alleviate heat stress in order to keep the immune system as healthy as
possible. What’s more, reducing heat stress can alleviate panting which avoids the bacteria from being
sucked down into lungs. Similarly, if animals are in close contact with each other, eliminating panting can
avoid one animal breathing out large amounts of bacteria only to be breathed in by other animals around it.

Colin Brown said for the amount of farmers that find shearing a successful way to manage the problem,
there are a good many that find the opposite occurs.

A healthy immune system is required to fight the bacteria from colonising on the wound site on the
lung. Assisting an immune system to stay healthy is why some farmers will opt to drench with a mineral or
vitamin mix. This drench alone will have no direct response in fighting the disease, but it may have an
indirect effect by assisting the immune system.