You are here: Home » Animal Health » Cattle like salt, too 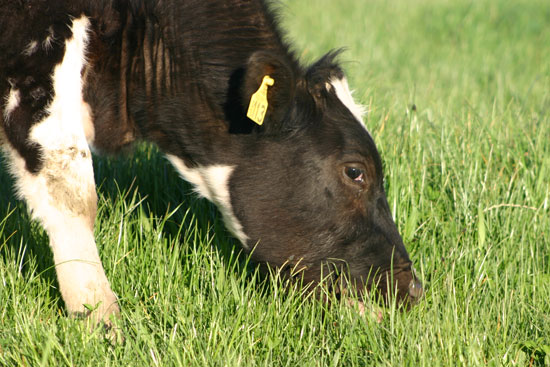 Salt, which is made up of sodium and chlorine, plays an important nutritional role in the diet of cattle, said Eldon Cole, livestock specialist with University of Missouri Extension.

But intake levels can vary, just like the methods of getting salt in the cattle.

“Cattle like salt just like some people like salt. But in a herd of cattle, you’ll likely find extremes on intake. Some eat a lot while others may seldom touch it,” said Cole.

Most forage contains ample amounts of chlorine, but most species of grasses tend to be short on sodium. Legumes usually contain sufficient sodium to meet the needs of cattle.

“As a rule, mature beef cattle need one ounce or less of salt a day. Research has shown the ounce can be obtained either from a block or as loose salt,” said Cole.

Salt was one of the original items to add convenience to cattle feeding. When added to protein or concentrate feeds at varying amounts, the intake levels can be controlled.

“You could put out several days worth of supplement and the animals would be expected to have a uniform, daily intake of the feed. Other feed ingredients are now being used that help control intake, but salt still works,” said Cole.

Cattle normally voluntarily consume about 0.1 pound of salt per 100 pounds of body weight. A 1,200-pound cow would eat about 1.2 pounds of salt each day when mixed with a palatable concentrate.

The salt used should be plain white salt without other minerals in it.

Cole says one frequent question is whether or not this high salt intake will cause problems to the animal or to the pasture (where the urine is excreted).

“The answer is, it doesn’t seem to, so long as the cow or yearling has ample water available. Research and producer observations have not come up with any effect on fertility, calf crop percentage, weaning weight or animal appearance from high salt intakes,” said Cole.

Using salt to control intake is not perfect, and intake levels need to be monitored closely, especially when first introduced to cattle, Cole said.

Overeating sometimes can occur or some animals may refuse to eat expected amounts.

Another drawback to using salt to limit intake is that it is corrosive to metal storage bins, feeders and farm vehicles.

“Plus, any type of self-feeding tends to make cattle a bit more nervous compared to seeing them daily when you put feed in a bunk for them,” said Cole.

Blending the salt in with some forms of supplement doesn’t work very well, according to Cole, and poor distribution, thus erratic intakes, may also result.

« Prozac for dogs, almost
Online calculators to help with N use »