You are here: Home » Environment » Interesting times at Lake Waituna 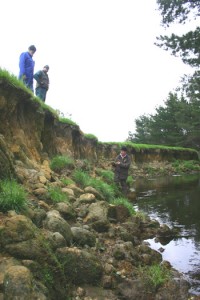 It’s peaceful, only a few fishermen about. There’s not been a white double-cab Toyota in sight for at least a fortnight despite lake levels dropping daily and the increasing risk of Lake Waituna flipping to “an algal dominated state.”

In the past six weeks we’ve had little rain, it’s dry, there’s no run-off from any sort of farming activity, let alone a dairy farm.

And yet the lake is full of slime – there’s little water in it, the temperature is high … anyone whose been reading The Southland Times knows what comes next!

Farmers in the area suggested (prior to the dry), opening the lake, because a dry summer could have adverse affects if the lake remained closed with little water in it.

But the ES scientists were focussed on Ruppia growth and did not entertain the idea, despite nutrient levels being at trigger point at that time.

So, what I wonder is… who will be to blame when the lake flips? Farmers have borne the brunt of it so far. We have listened to the theories the ES scientists have run with but what about Plan B?

To my knowledge there is none… maybe that’s where farmers come in… is that where we’ll go back to the easy option in the blame game?

Or, is today’s condition of Lake Waituna evidence that farming is not the only contributor as first thought? Is it possible our weather conditions have something to do with it?

And, I’m fascinated to see that despite all the hue and cry of the past several months we’ve not seen anyone (apart from fisherman etc) taking any notice of the lake since before Christmas.

Hell, even the greenies have forgotten about the “gem of the south.”

My wife, Joanne, wrote an opinion in November in which she pointed out that several decades ago, when our farm was first developed, production was more important than the environment. She also mentioned that two months ago we offered to sell our sheep farm back to DOC, but they had declined.

Now, despite all the fuss about saving Lake Waituna … it seems that not only do production and money rate higher than environmental issues … so, too, does Santa Claus!