You are here: Home » Environment » Lure dangerously attractive to stoats 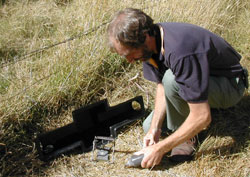 The drive to control one of the worst predators of New Zealand’s native wildlife has taken a leap forward with the development of a new, humane lure by Auckland wild animal pest control specialist Connovation Limited.

The paste is designed to lure stoats into traps. It proved its effectiveness in trials last year when 64 stoats were caught over a three-month period using the new control tool.

Called Erayz No3, the paste is already being used by Excell Corporation which provides a range of maintenance and management services, including pest control, to government agencies throughout New Zealand.

Excell’s Biosecurity Supervisor Dave Hunter describes stoats as a ‘pocket size killing machine and one of the few predators that kill for fun’.

“They are excellent climbers and very good at finding nesting birds. They are aggressive, with sharp teeth and claws, not afraid of anything and equally at home in forests as they are in coastal habitats.”

He says they also reproduce quickly and travel long distances in search of food.

Connovation has a long track record in developing fast acting pest control technologies with its core product Feratox remaining the most popular form of ground bait for possums in New Zealand.

Steve Hix, Connovation’s Research Manager, says the new stoat lure is made from rabbit with preservative added to extend its field life. It is not attractive to flies and lasts at least two weeks in a covered trap in the field.

“Having an odour that is almost identical to fresh rabbit is the key to the success of Erayz No3 says Hunter. We are competing against natural food sources when we trap stoats so the lure has to be very good and make the stoat want to enter the trap box.”

He described the performance of the new product as incredible, saying it has proved its attractiveness to stoats in a number of settings.

“I put it out one afternoon, in an area where there were breeding penguins, and returned the following morning to find two stoats trapped. The stoats had actually gone for the bait in preference to the young penguins.” Other animals to be trapped by the new lure include ferrets, hedgehogs and wild cats.

While the product is guaranteed to last two weeks Hunter says he has caught a ferret with month old bait.

“The appearance of the bait had changed but there was no mould and it obviously retained all the right smells.”

Excell Corporation has a stoat control contract underway with the Department of Conservation in Banks Peninsula and is using the Connovation lure as part of its pest control programme.